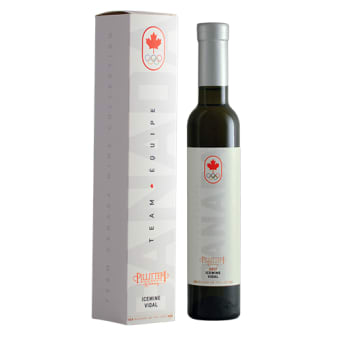 Team Canada Vidal is a bold, aromatic Icewine. Produced by Pillitteri Estates Winery, this wine has lush tropical fruit characters and a velvety finish. With every bottle purchased, a $1.00 donation will be directly contributed to the Canadian Olympic Foundation and its efforts to support Canadian athletes.

Pillitteri Estates Winery is the world’s largest Estate producer of Icewine and is a family owned and operated winery with 3 generations of the family full time employed in the operation. Founded in 1993 and is situated on 175 acres of vineyards in Niagara-on-the-Lake, Canada. It currently exports to 35 countries. Pillitteri has won over 1000 international and domestic awards, reflecting the winery’s commitment to produce premium VQA wines.